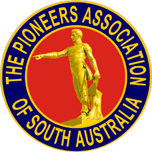 The Pioneers Association of South Australia: the First 80 years
by Cheryl Williss On 19 September 2015, the Pioneers SA celebrated its 80th anniversary. To mark the occasion, this book, published by Wakefield Press, tells the story of the Association’s journey thus far. With a Foreword by the Honourable Alexander Downer AC, this quality hard cover limited edition was extensively researched and is illustrated in colour throughout. It not only provides an opportunity for new members to learn about the history of the Association but also offers readers some insight into the social, cultural and political history of Adelaide. An appendix to the book lists all Association members as at 30 April 2015, together with their (earliest) ancestor’s ship and year of arrival in the Province of South Australia.The cost of the book is $35; plus $13 for postage, or it can be collected in person at our office. Payment can be made by direct bank transfer (prefered) or cheque. Contact PioneersSA on (08) 8231 5055 during office hours or by email at info@pioneerssa.org.au for details.

The Coromandel was part of the first group of vessels sent out to commence the colonisation of SA.

This is a “must have” book for members, exploring the lives of mainly ordinary labourers arriving during the birth of SA. Not just for descendants of Coromandelians, this book is for all who are interested in the story of SA’s  early pioneers and the social history of the SA colonisation experiment.

Notes to be read in conjunction with the book Coromandelians.

To Purchase a Copy

The book is now available at $60.00 for Pioneers SA members and $65.00 for non-members. If you would like a copy please email info@pioneersSA.org.au including "Purchase of Coromandelians Book" in the subject line.

Over the years the Pioneers Association of South Australia Inc. (Pioneers SA)  has published many booklets about pioneer settlers and the early history of South Australia. Copies of are available either in the original print format, .pdf

facsimile where the original print has been sold out.

For a comprehensive index or contents please refer:  Consolidated Index of Publications

To place an order, complete the Publications order form or contact the Pioneers SA on (08) 8231 5055 or email info@pioneerssa.org.au

All Publications are available to Pioneers SA members from the Members Resource Area in the Publications eBooks page.

This is the first of the Pioneers Association's many publications to be offered freely online, in keeping with its policy of increasingly taking advantage of digital media.

In it, the author, a Pioneers SA member and retired lawyer, provides a thorough account and documentation  of his research published in outline in three articles published in "The Pioneer", No. 224 Autumn 2012, No. 222 Winter 2012 and No. 224 Summer 2012. This publication is concerned with finding the identity of the first white person to die in the colony of South Australia and the location of that person's burial.

In pursuit of this, the author has addressed a number of other critical questions such as: "When did the colony begin?" and "What areas of land and sea actually constituted the colony?" Answers to these questions are important in order to clearly define times, locations and circumstances of early deaths, and thus address his principal questions unequivocally. Brian Stace has painstakingly worked through all of the standard databases of South Australian shipping arrivals, passenger lists, deaths and burials as well as monumental inscriptions, newspapers, books, letters and other records held in the State Library and State Records (Archives), critically sifting the evidence to assemble his case.

He begins by describing early (pre-settlement/Proclamation) deaths at sea and on land, including both the mainland and Kangaroo Island, documenting these in some detail, together with supporting evidence. Then he looks at recorded deaths and burials following proclamation, having made a convincing case among the contenders for the first person to die in the colony as Eliza Stace, his great, great grandmother. His next task is to locate where she was buried. Here he is once again meticulous in his research, and comes to the conclusion that her last resting place was most likely near St Peters Church, Torrens Square, Glenelg.

The author has made extensive footnotes and endnotes, which not only pinpoint the sources of his evidence but also allow him to explain his research arguments and conclusions. Anyone wishing to follow his argument in detail will be well served by this.

This publication is a welcome addition to Pioneers SA offerings, and perhaps the first of many to be available in the new format.

"A Pioneer History of South Australia" [ISBN 0-9599901-8-6] is no longer available for sale. Copies are avallable to view at the Pioneers SA library, or you can check it's availability at your public library.